By Sumit Sharma September 29, 2016
Nearly a year after launching its Moments feature, Twitter is following up on its promise to finally open up the platform to all the users globally.

Twitter announced yesterday (via a Tweet) that Twitter is rolling out a new feature that allows all Twitter users to create their own Moments, the collections of Tweets connected by common subject matter that the site first introduced in October 2015. Moments feature uses tweets, images and videos to track real time events like breaking news, live concerts and sports events.

Clicking to the section on Twitter takes you to a kind of user generated contents with various categories on display. You can click your Moment of choice and you arrive on a link that lets you scroll through the collected tweets, images & videos.

Moments were originally introduced only for Twitter employees, editors and group of publishers. But last month Twitter began letting a wide group of influential people and brands start whipping them up, and it announced plans to open the feature to everybody.

How to create a Moment?

To start head to your Twitter profile and click on Moments tab. Then locate the “Create new Moment” button and click on it. You’ll need to give a name to your Moment and a quick description before picking tweets to include.

Twitter will let you scroll through tweets you already Liked, search for new ones based on keywords, or add them directly by inserting a link. At last, you’ll need to choose a cover photo, picking from the imagery already included in your Moment or adding a new one. 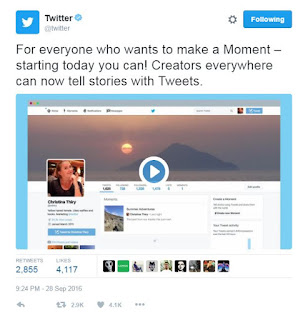 Once you’re done, you can easily publish your Moment, tweet it out and embed it somewhere online. Twitter also offers the option to save your draft by clicking “Finish Later” instead. There is also an option, where you can post your moment privately.

Did you find Twitter Moments useful for your product or brand?

Let us know in the comments.